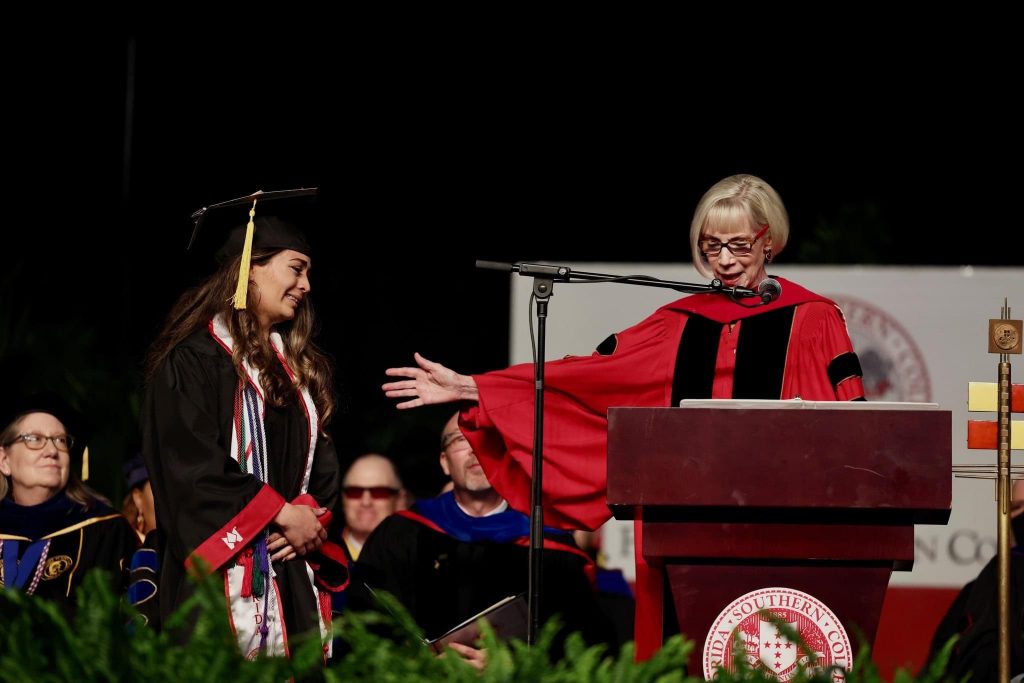 It is remarkable that in high school Lillee Izadi kept going. Her mother was absent and her father in jail. As well as attending her classes at Booker High School, she held down a job and tended to her three sisters until they moved to Ohio to live with a family friend. Then she was homeless, living in her car.

While Lillee possesses an immense reserve of resilience, she credits other people for keeping her going—especially her teachers and friends. She can’t say enough about her teachers. They would bring her food and during holidays invite her to big meals. Before her sisters left for Ohio, her teachers would drive them home if Lillee had work or other obligations. After she started living in her car, a friend invited Lillee to stay at her house, and that friend’s parents soon took Lillee in as part of the family. These people saw, as Lillee notes, potential in her that she couldn’t.

While in high school, while navigating her complex life, she began to nurture what became a passion and future career pathway: medicine. She was touring the Sarasota Health Department through an afterschool club when she met a schoolmate who encouraged her to volunteer at the nonprofit Multicultural Health Institute, run by Dr. Lisa Merritt. She did just that and soon was hired on to work the front desk. Before long, Lillee was checking in on patients and assisting her coworkers, gaining insight into medicine that would help inspire her to apply to college.

At the end of her senior year, Lillee was recognized as a STRIVE Award recipient. Through the STRIVE Awards, the Education Foundation of Sarasota County celebrates remarkable high school juniors and seniors who have overcome challenges to succeed in life and academics. Lillee also received a $2,000 Suncoast Credit Union Scholars Scholarship from the Education Foundation. In addition to the practical financial assistance these and other scholarships provided, they gave Lillee much-needed confidence as she prepared to do something that no one in her family had ever done: attend college in America.

In the fall of 2018, Lillee began to study at Florida Southern College (FSC). While the STRIVE Awards and the Suncoast Credit Union Scholars Scholarship provided affirmation, Lillee still doubted herself. Even as she excelled academically, she considered changing majors and her career pathway. But once again her professors saw her potential and provided the support she needed to persist as she pursued biology and found opportunities to shadow doctors and gain research experience.

At FSC, Lillee was diagnosed with a learning disability—a processing disorder—and learning more about it and how to manage her difference helped. Lillee also was able to afford braces in college. Her confidence grew, and she began to mentor incoming freshmen. Driven by a need to give back, she wanted to provide the kind of guidance that has been so valuable in her own life.

Lillee’s braces came off in June, and in July she will do clinical research and medical observations in the prestigious Johns Hopkins School of Medicine Doctoral Diversity program. She will conduct her observations in Ohio, not far from her sisters, and she looks forward to spending more time with family while preparing her medical school applications.

Of the many lessons that Lillee has learned along her incredible journey, one is that no one gets through life alone. She has learned to ask for help and to accept it. She is grateful for the teachers, friends, and organizations that have believed in her and helped her along the way. And today, as she prepares for her next journey, she is already beginning to give back herself—to support and uplift others as she has been. She has become an advocate for child foster care and makes monthly visits to check on young people. She moves forward committed to giving others that extra support they need to also reach their full potential.