Alyssia Lazin, a renowned photographer, artist, and designer, sees life divided into three parts: learning, earning, and serving. Two years ago, she felt ready to explore the last third. She had heard about mentoring through the Education Foundation of Sarasota County, and when she had the opportunity to be part of the mentee interview process, she signed up. 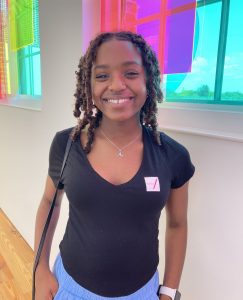 Alyssia was paired with Ausiana Laguerre, a senior at Sarasota High School who was interested in studying business in college. Alyssia immediately threw herself into the college application process, researching schools with high-quality business programs and searching for scholarship opportunities that would enable her mentee to realize her dream of an undergraduate and graduate degree. She shared what she’d learned and provided support and encouragement throughout the process, enabling Ausiana to make the most informed decision she could.

Though their relationship during the first part of Ausiana’s senior year focused on college and scholarships, it grew after both were able to get vaccinated against Covid-19 and could spend time together. Alyssia wanted to nurture Ausiana’s interest in the arts. Masked, they attended galleries at Ringling College of Art and Design, the Ringling Art Museum, and the Sarasota Art Museum. The two shared inspiring conversations about what they’d seen and, as Ausiana says, “truly explored the world of art.” They also took walks on the beach on Siesta Key and even went blueberry picking.

In the summer, Alyssia returned to Italy, where she lives half of the year, and Ausiana moved to Gainesville to attend the University of Florida. Miles apart, they stayed in contact over the phone, but in no way has their relationship diminished. Indeed, recently Alyssia assured Ausiana that she will always be there for her. Over the recent winter break, they had the opportunity to meet again, and Alyssia took Ausiana to a performance of Joyful! Joyful! at the Westcoast Black Theatre Troupe. As Ausiana says of her mentor, “she’s been an amazing listener and has shown a genuine care for my life …as I continue growing throughout this new journey of college.” 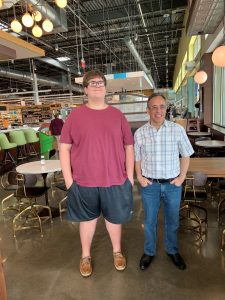 Like Alyssia, David Grace had never mentored but felt that it was time to give back to his community. David runs a website design company with his wife, and his daughter is a senior at Williams College in Massachusetts. He connected with the Education Foundation and was paired with a senior at Riverview High School, Ryan Hicks.

In middle school and during his freshman year of high school, Ryan had coped with the death of a close family friend and then his own father. Just before losing his father, his mother was diagnosed with cancer. As he dealt with these immense blows, his grades slipped, along with his motivation. But slowly he began to regain his focus and set about to improve his grades. It helped so much his senior year when he met his mentor.

Although it took a few months to build a trusting connection, they did, and David provided invaluable support. The two would meet at Whole Foods as David helped Ryan navigate the college application process, providing guidance on everything from deadlines to college essays to possible career pathways. Ryan didn’t know what he wanted to do. He felt lost. But it meant so much to have a male figure in his life who encouraged him and helped him work through important decisions.

In the spring of 2020, when the pandemic hit, they moved their meetings to FaceTime. That summer, Ryan moved to Alabama to begin studying at Auburn University. Still, Ryan and David spoke every two weeks. David encouraged Ryan to excel in his classes to keep open his options—and to persist amidst the uncertainty that arrived with Covid. He also provided much-needed support for Ryan through a difficult decision to transfer away from Auburn to Santa Fe College, in Gainesville, Florida.

Recently, Ryan surprised David when he shared his interest in pursuing a degree in religious studies at the University of Florida so he could become a pastor. The two come from different religious backgrounds. Yet as Ryan says of David, “He listens to what I’m saying and takes it into account. I really appreciate him.”

Heartened to see Ryan identify and pursue this passion, David has supported his new decision. He has become a father figure to Ryan, who is so grateful to have someone he can always turn to, someone he knows will be there for him throughout his winding college journey.

Both Alyssia and David expressed the immense satisfaction that comes from mentoring. Both speak of the reciprocal nature of the relationship as both mentor and mentee teach each other about life. And both mentors have left an indelible mark on their mentees, providing them hope and stability during incredibly unstable times—imparting caring and compassion that will follow Ausiana and Ryan far beyond college graduation.