Uncovering Pathways amid the Pandemic 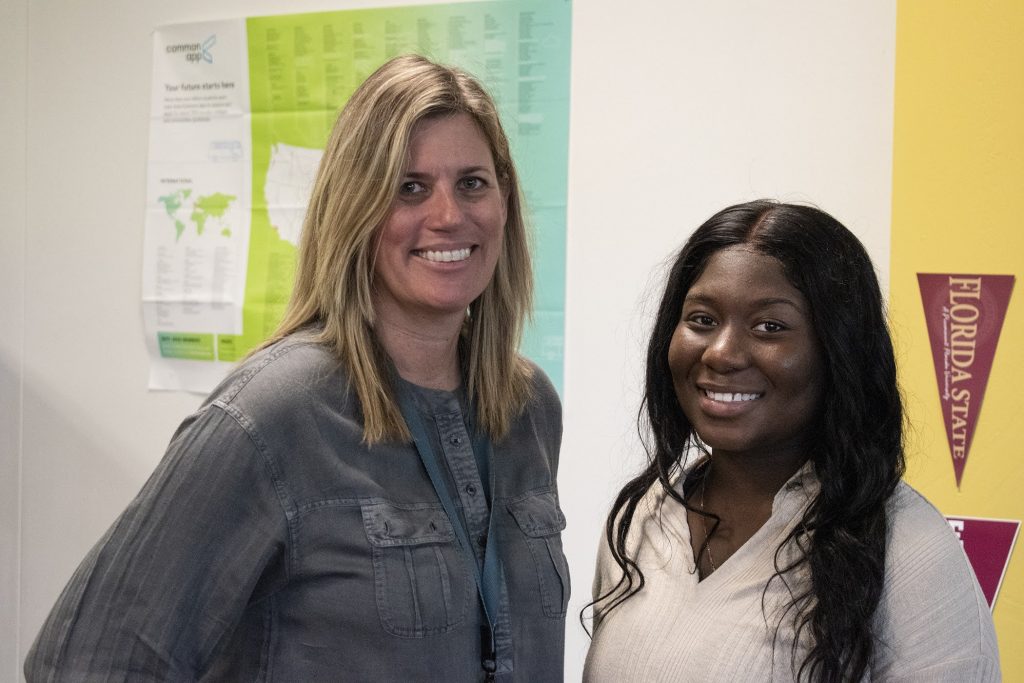 It’s safe to say that in 2018, when Rebecca Lewis opened the Student Success Center at Riverview High School, she could not have envisioned that within two years she would be helping students discover their pathways—amid an unprecedented pandemic. But the Education Foundation of Sarasota County College Career Advisor has done just that.

Today, as her seniors share with her news of college acceptance letters, and as others continue to formulate career plans, Rebecca feels a unique connection to this graduating class. They are the first to have had a Student Success Center available for all four years. She has worked with many seniors for three or four years. She has provided much needed support during the pandemic, helping students identify career goals and urging them to persist in the face of uncertainty.

For seniors such as Breanna, Kieran, Ruby, and Nick, Rebecca has been a steady, positive guide, someone who has helped prepare them for life.

“I liked the chairs.” 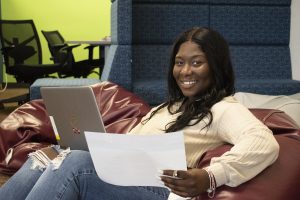 Next year at Valencia College in Orlando, Breanna Avrissaint will pursue her dream of teaching elementary school—in South Korea. A Haitian American young woman who was born in Miami, she is fascinated with South Korean street culture and its history. She hopes to visit there soon and one day to work abroad, immersed in a culture she loves.

Breanna first visited her Student Success Center as a sophomore. While initially drawn to the colorful, comfortable chairs, she soon realized she had found something far more important: a trusted advisor she liked to talk to. She began to visit every two or three weeks, and by her junior year, Breanna visited almost daily.

Rebecca has been an invaluable guide. In addition to helping Breanna complete her Free Application for Federal Student Aid (FAFSA) and her college applications, Rebecca helped her weigh career pathways of nursing and teaching. Rebecca helped her find a community college near the University of Central Florida (where Breanna hopes to transfer) that has a study abroad program. And Rebecca was there for Breanna during the difficult days of transition from remote to in person learning, when her father was ill. She was someone Breanna could go to for extra support.

“It was so confusing.”

During his junior year, Kieran made his first visit to the Student Success Center to sign up for the SAT, but he was nervous and already stressed out about the pandemic, and he didn’t return until he was a senior 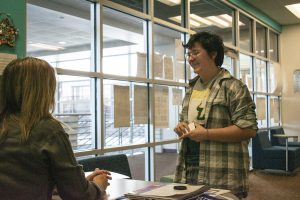 Kieran soon became a regular at the Student Success Center. He identified colleges across Florida, but the pandemic precluded him from visiting campuses. With Rebecca, though, he researched schools, compared them, and found all sorts of information that helped him determine which would be the best fit. He connected schools to his passion—chemistry. He loves chemistry. Inspired by his high school chemistry teacher, Maggie Jones, he too hopes to impart in young people a love of the subject.

In the middle of November, Kieran was accepted into his top school, the University of South Florida (USF). He feels certain that without Rebecca’s assistance, he would not have done so well. Indeed, his only regret is that he didn’t start earlier.

“She helped me find a career I could work toward.”

Ruby Johnson first met Rebecca her freshman year, during a classroom visit. After that, she started turning in community service hours at the Student Success Center, and by the time she was a junior, she was visiting every second month—in search of a plan. 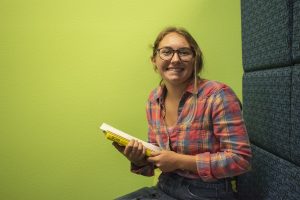 Active in track and soccer at Riverview, Ruby likes math, but she had no idea what she wanted to do after high school. At the Student Success Center, Rebecca guided her to Naviance college- and career-planning software. Ruby began to take career interest assessments, and between those and her discussions with Rebecca, she identified a pathway: teaching math at an elementary or middle school.

Having found a purpose, Ruby has progressed more intentionally through her senior year. Before this year started, she attended college-planning workshops at the Student Success Center, and she now visits twice a week. She has learned about FAFSA and worked with Rebecca on her applications and her essays. She has applied to five colleges in Florida, and she feels confident as she approaches her last semester of high school. 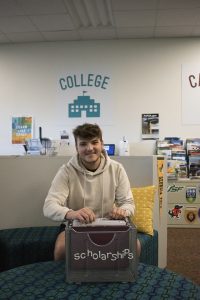 Nick Guzzo, admittedly, didn’t try in school during his freshman and sophomore years. In fact, his truancy became so bad he found himself on the verge of losing his driver’s license. To keep driving, he had to attend school, and when he started his junior year, he started trying.

As a junior, he first visited the Student Success Center only to drop off community service hours. He’d heard good things about Rebecca and the center from his senior friends, but with a 2.7 GPA, he worried that he had no chance of attending college.

Yet Nick is fascinated with architecture and construction. Wondering if there was any chance to pursue these interests after high school, he met with Rebecca. Together, they formulated a plan.

With hope, he applied himself even more. He visited the Student Success Center almost daily, often just to find a place during lunch where he could finish homework. He has increased his GPA to 3.4 and has applied to colleges in Florida and as far north as Massachusetts. Now he awaits word on where he’ll study next year.

In the spring, Breanna, Kieran, Ruby, and Nick will all graduate with a plan in place. They will pursue careers and dreams that could take them as far away as South Korea. While their high school experience has been turned on its head, and while they battled the uncertainty and anxiety that has affected everyone these past two years, they still found purpose. With the support of Rebecca and the resources at the Student Success Center, they will begin their next adventures more prepared for life.