Empowering Students to Spread the Word 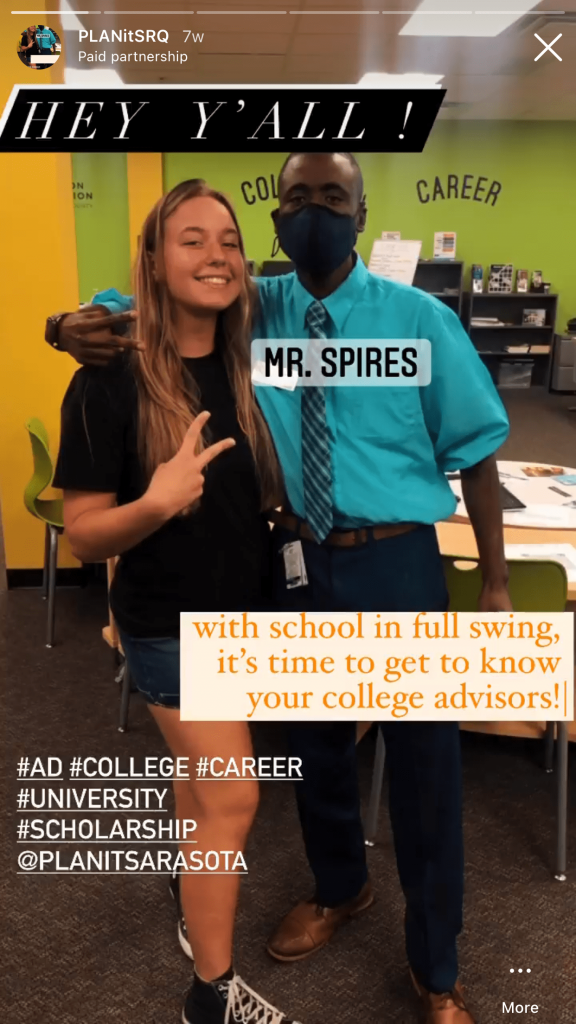 As a former high school English teacher, I know well that many students will listen to their friends way before their teachers or other adults imploring them to do something. I also know that students have a distinct way of communicating with each other that, while foreign to me, seems effective.

It was with this understanding that members of PLANit Sarasota, a collective of community organizations and corporate partners that support students, launched a student influencer campaign as part of a Florida College Access Network (FCAN) grant to raise awareness around completing the Free Application for Federal Student Aid (FAFSA) and persisting with college plans in the face of the pandemic. The idea was simple: engage students to use social media to inform their peers about FAFSA and the importance of staying the course to college enrollment.

Enter Quinn 0’Connor and Anna Lazzara. Both seniors at Sarasota High School, the two began spreading the word this fall. Yet their paths to student influencers were quite different. Quinn moved to Sarasota from Seattle, Washington, at the start of high school, and she found her way to the Student Success Center at the end of her junior year. She needed advice on financial aid because she wants to attend college out of state. Anna has lived in Sarasota all her life, and she visited the Student Success Center early this year to begin formulating a plan with her College Career Advisor.

While they grew up on opposite sides of the country, Quinn and Anna share a passion for helping others and giving back, and both are highly engaged in schools, active in clubs, volunteering, sport, and arts. Indeed, it was their altruism and enthusiasm that led their College Career Advisor, Cheryl Haller, to connect Quinn and Anna with Thomas Williams, the director of PLANit Sarasota.

Soon, they were signed up to join the campaign. At the end of this August, they began posting on PLANit Sarasota’s Instagram account and on their own Instagram and TikTok accounts. They share announcements about upcoming events such as FAFSA open houses and college visits. They create posts that raise awareness of the Student Success Center, steps in the college-application process, and standardized testing.

Since they started, students have begun to ask Quinn and Anna questions via direct message, and the two have become leaders at the Student Success Centers, vital sources of advice and information. They both guide students to the center and help ease the overload of student questions directed at the College Career Advisors.

In becoming leaders at the Student Success Center, both have gained confidence as they see the activity around their social media accounts and in the Student Success Centers grow. Hundreds of students interact with their content, and the two young women understand that they are making a difference. They’ve been helping students through the stressful process of applying to college and preparing for their future.

What’s next for Quinn and Anna themselves? Quinn hopes to attend Barnard (in New York) or the University of Washington (in Seattle) to study pre-med, and Anna plans to attend Ekerd College (in St. Petersburg) to major in American Studies. And when they head off in different directions to college? Both hope to continue serving as influencers. They want to keep helping students who next year will be where they are now. By sharing their experiences in college, they hope to help a new class of seniors graduate even better prepared for college and life.