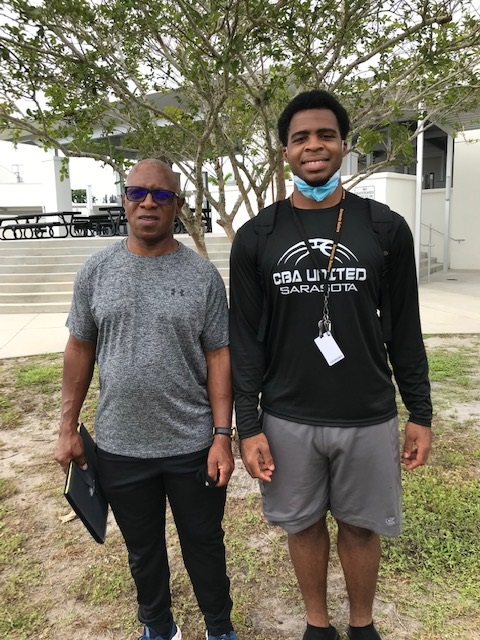 When he was six, Desmen Lee fell in love with basketball, and though he’s tried others, none have felt as natural as the sport that he first found at the Sarasota YMCA. A reserved young man, Desmen has always felt freer in a gym, alone knocking down free throws or running the court with his teammates. The Sarasota native began his high school basketball journey at Booker High School, but in 2019, before his junior year, he transferred to Sarasota High School to play for the Sailors.

Cheryl Haller did not expect to end up in Sarasota, or at Sarasota High School. A Michigander and college advisor, she was ready to move south with her husband in 2019 but planned for Raleigh, North Carolina. That changed after she applied for a part-time College Career Advisor position at the Education Foundation of Sarasota County. She was hired to work full time, opening a new Student Success Center at LaunchPad4U, a community resource center in downtown Sarasota. But when a need for a new advisor at Sarasota High School opened, Cheryl filled in, expecting the move to be temporary. Yet realizing the value of her work, the real need high school students had to engage one on one with dedicated College Career Advisors, Cheryl continues to support the students of Sarasota High.

Wade McVay grew up in Charlotte, North Carolina, in a military family. Instead of enlisting, though, after graduating from Western Carolina University, he followed a different path, joining the police force. He applied for a job in Sarasota and was hired in 1984. For 19 years, he served the city of Sarasota and retired in 2013 as a captain on the force. Wade has also coached football and girls basketball at Booker High School, and he has mentored since his college years, initially through Young Life and his Alpha Phi Alpha fraternity. In 2019, Wade married his wife, Suzette Lee, who happened to live next door to the COO of CareerSource Suncoast.

For 30 years, Jeff Blanchette taught and served as the director of choral arts in Plainville, Connecticut, but after visiting Sarasota in 2003, he knew he would ultimately move here. Five years ago, he began building a house, one of three houses in a new development. His house was next door to the COO of CareerSource Suncoast, who encouraged him to check out the Education Foundation, which he did. Jeff now serves as the Education Foundation’s mentoring manager.

When he began at Sarasota High, Desmen found his way to the Student Success Center, where he met Davian Spires, Cheryl’s colleague, as well as a community of welcoming students, many of whom shared his love of athletics. Davian introduced Desmen to Cheryl, who saw a terrific young man who would benefit from mentoring. She reached out to Jeff, who had an idea.

When you live in a development with only three homes on it, the chances are good you’ll become friends with your neighbors. So it was with Jeff and Wade. In Wade, Jeff saw a tremendous role model, and he encouraged him to mentor for the Education Foundation.

In early June, Wade began mentoring Desmen, and the fit could not be better. The former coach, full of life experience, provides, as Desmond notes, “a shoulder to lean on.” The two connect weekly, by phone or in person, and Wade attends Desmen’s games when his schedule permits. Wade provides moral footing and helps him keep focused. And because mentoring has a reciprocal effect, Desmen, with his smile and his positive outlook, inspires Wade.

Along with the support Desmen finds through mentoring, he has become a regular at his Student Success Center, visiting two to three times most weeks. There, he has compiled lists of Florida colleges where he could play basketball and has set up a website where coaches can view video clips and learn more about him. He has practiced for the SAT and worked on his applications.

The support network of mentoring and College Career Advisors has helped Desmen navigate the challenges of moving to a new high school and planning for life after graduation. It provides the invaluable comfort that comes from knowing people are looking out for you.

Connections are a curious thing—the countless decisions and actions that transpire to bring remarkable, caring individuals into each other’s orbit. And when it happens, the effects are transformative. That’s why the Education Foundation celebrates these connections and nourished them. They change lives.